Toddlers ask a lot of questions, a lot of exhausting questions. Currently, my 4 year old wants to know all about the sun and the moon, and is fascinated that he can't see stars in the day. Their innocent curiosity, often displayed with the endless number of "Why??'s" is their way of learning about their world, and also of pushing us to teach them.
Amongst these fascinating questions though are some really hilarious ones. Or at least hilarious to us since it's completely innocent on their part. Below are some of the many crazy questions toddlers ask, along with some diffusing replies (and I wouldn't help including what I want to say to these, but have to hold my tongue to quell the curiosity every time). 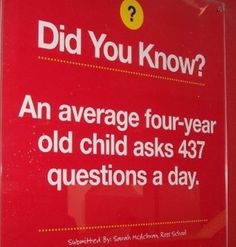 
1. "Mama, is there a baby in my stomach?"
The perks of being an older sibling is that your older toddler has seen a lot, and remembers all kinds of things. Including the baby in your tummy. My son often asks if there is a baby in his father's tummy, and on occasion if there is one in his own.
What I want to say, but don't: Why on earth would you want one there?
What to say instead: Only when they are grown up, responsible and married, then can women have babies in their tummies, so that they can become mamas.


2. "Why is your hair brown now?"
I coloured my first in the first half of last year, and my son to date, asks me why it's brown now. I doubt he remembers what it looked like before but the conversation has stayed with him and he likes to repeat it on occasion.
What I want to say, but don't: I was bored, felt like I was in a rut and wanted a change so I took it out on my hair.
What to say instead: I wanted my hair colour to be closer to yours (or someone else you know with the shades you got), because I love you so much. (You can also add in a line on how these things do not matter in the long run).


3. "Where do babies come out from?"
This is a common one, particularly for elder siblings.
What I want to say, but don't: You really do not want to know!! It's a watermelon through a donut hole. Though can you go back in so I can nap?
What to say instead: Mama's body is miraculous and is able to make room for the baby to come out from her tummy. (This leaves it a bit open to interpretation - and you can get into more details depending on the age of your child).


4. "When will I get hair down there?"
Kids love to be in our space, it makes them feel connected, which makes it difficult (particularly for moms) to keep our kids out of the bathrooms. Now that my son is 4 and I know he has a good memory, I am trying more firmly to put my foot down on letting him in when I am changing (bathing has been a no for a bit longer), which at times literally means throwing something somewhere to make him go get it, and then running in and locking the door to screams and banging - then hurrying as much as you can (I'm not kidding).  Invariably though at some point, they are likely to get curious about what they see, and we don't always know when that point is.
What I want to say, but don't: When  you have it you will be going through all kinds of pain to get of it.
What to say instead: When you are older, and become an adult, changes in your body are a natural part of growing up. 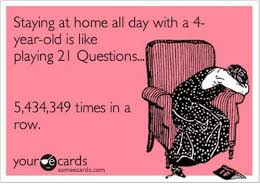 5. "Can I have a/another brother/sister?"
I'm not sure why my son wants more siblings, maybe it's a sign of how well he's adjusted to the one. However, I know an increasingly number of people who don't want second kids (seems to be a logical outcome of the increase of women in the workforce), let alone a third or more. This is not just an understanding that both parents need to sure but something that, once decided, needs to be communicated to our babies to.
What I want to say, but don't: So many choices have me biting my tongue, from "Yup, as soon as your dad can get pregnant and start lactating," to "as soon as we win the lottery!"
What to say instead: You two have each other, and are already best friends, and will get even closer once your sister gets older, she will play, talk, run and keep you on your toes - you really won't want for anything when it comes to companionship. (You can use examples, I always tell him how close I am to my brother and how we used to live together. In case of an only child, tell them how you are there for them and are their best friend).


6. "Why are you putting a leaf in your underwear?"
Literally what my son said when he barged into the bathroom last summer on vacation and saw a tampon for the first time. This was really not fun and I stammered for a few minutes before I could say anything.

What I want to say, but don't: My monthly penance is due, and let's just be grateful that it's here.
What to say instead: Girls and boys have different bodies and when girls grow up there bodies are capable of growing babies, this is a part of the process. (You can simplify it more if you don't want questions about more babies, but that's the gist of what worked even on my 3 year old).

7. "Will you marry me when I grow up, mama?"
Kids are so beautifully innocent and naive, and this question touches my heart as it is simply their expression of their love for us and not wanting to be apart.

What I want to say, but don't:  Don't worry honey, I'm going to make your potential significant others so miserable (to prove they are worthy of my baby) you may not feel like you have a choice. Though, if you still feel this way in 20 years, we can have this conversation again (with a shrink).
What to say instead: You will never be far away from me my baby, I love you to the moon and back. (And if you feel they need more indulging, go for it! You can even tell them that you are always there for them). 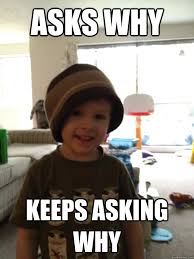 8. So mama, are you a cow?
Yes, my son actually asked me this in as many words, at the age of 3 and a half. He has an amazing sense of humor, and after discussing what I used to feed him and his sister when I used to be nursing, he asked me this and actually moo'ed at me!
What I want to say, but don't: I sure as hell have felt like one, thanks to you two!
What to say instead: Mama's body is amazing, in every species. And after carrying a baby in our tummies, we are able to make milk to feed out little ones. All mammals/ animals that carry their young, are able to feed their little ones themselves.  This stops when our babies are a little older (which also quells the - Can I feed from your chest question).


Hope you got some giggles out of this one mama, along with some answers for your tots too!
More to come,
-TKV

All content on this blog belongs to the author and cannot be reproduced or replicated without permission.